My group's current focus is on
Other current interests include image-based modeling of microstructures from CT-scans, with application to most of the aforementioned topics.

Variational Consistency
While approximations with arbitrary-order accuracy can easily be constructed, this does not guarantee that the order of accuracy will be achieved in the Galerkin solution to a problem, even in the simple setting of a linear displacement field, or a so-called patch test. While not a difficultly in traditional approaches, in meshfree methods the numerical integration of rational approximations with no intrinsic tie of their support to integration cells makes this difficult to achieve. As a result, high-order quadrature in traditional Gaussian quadrature is necessary to ensure stable and accurate solutions, yet the associated computational cost makes this intractable. Low-order integration is much faster of course, but cannot yield the accuracy of the former, presenting an impasse. In (Chen, Hillman and Rüter, 2013) the concept of variationally consistent integration (VCI) was introduced, where the exact requirements for nth-order accuracy in the Galerkin equation were set forth. This work finally showed an alternative path to high-order accuracy without high-order quadrature. An efficient correction was then introduced where optimal convergence can be achieved with low-order integration, alleviating the efficiency bottleneck that has plagued Galerkin-based meshfree methods since their inception in the 1990s. This work has since served as the basis of new methods developed by other research groups. A two-part paper (preprints: Hillman and Lin 2021a, Hillman and Lin 2021b) extends VCI to thermomechanical problems, where the nth order conditions are derived for a two-field problem for the first time.
While this approach can provide significant speedups, the remaining cost relative to traditional FEM and low-order meshfree methods like smoothed particle hydrodynamics (SPH) still makes these methods less attractive. In the future, Hillman plans to accelerate the computations even further by leveraging recent peridynamic developments: in (Jafarzadeh et al., 2021a), a fast-Fourier transform method was introduced that circumvents the traditional limitations of periodic domains (Jafarzadeh et al., 2021a) and linear problems (preprint: Jafarzadeh et al., 2021b). This technique allows speedups of orders of magnitude (hours to minutes, days to hours).

Figure: VC- correction of naturally stabilized nodal integration (NSNI) in thermo-mechanical problems for coupled and uncoupled cases (delta = 1 and 0 respectively).
Consistent Weak Formulations
Meshfree methods are unique in both their abilities, but also their properties concerning the Galerkin solution. The above work addresses the issue of solution error due to quadrature; however, these methods also are non-interpelotory, so that essential (Dirichlet) boundary conditions are not easily imposed, which has been the subject of research since the mid-1990s. This problem has been addressed by either weak enforcement, or more commonly, strong enforcement in conjunction with the traditional weak formulation. Yet, in the latter more popular approach, there remained an inconsistency yet to be investigated:  the subspaces required in the standard weak formulation cannot be constructed using most meshfree approximations.
In recent work (Hillman and Lin, 2021), my Ph.D. student Lin and I showed that this inconsistency resulted in an  O(h) (with h the nodal spacing) error in the energy norm of the Galerkin solution to second-order PDEs, independent of the actual order of approximation employed, placing a barrier on the order of Galerkin accuracy to linear. This inconsistency was also shown to result in the loss of the energy norm projection of the error onto the test space, no longer yielding the celebrated best approximation property in Galerkin methods. To address this inconsistency, Hillman and Lin introduced consistent weak forms, which permitted the use of meshfree approximations. It was shown that this formulation restores the projection property of the Galerkin solution, and allows p-refinement, pth order optimal rates in h-refinement, and introduced a new concept called a-refinement. Future work in this area includes the introduction of the variational multiscale method (VMS) for alternative effective boundary condition enforcement, with VMS then developed for other constrained problems in meshfree methods.

Figure: Consistent strong enforcement of boundary conditions: consistent weak forms (CWFs) restore the projection of the Galerkin error onto the test space and ability to provide optimal rates of convergence. 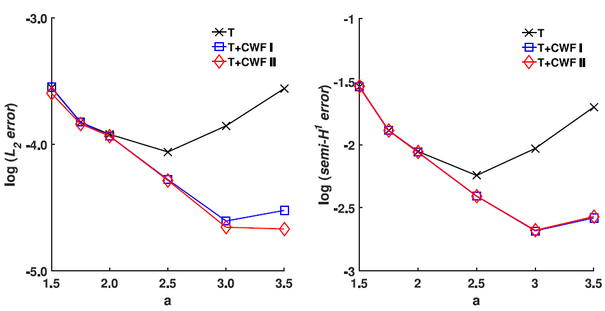 Figure: CWFs enable a new concept called "a-refinement": increasing the kernel measure can lower the error by an order of magnitude.
High-order Peridynamics and Shock-enriched Meshfree Methods
Also in recent work, Hillman, Pasetto, and Zhou, 2019, investigated the relationship between the traditional meshfree methods and peridynamic-based meshfree methods that have the potential to tackle the long-standing challenge of computational fracture mechanics. While some relationships had been established in ideal conditions, this work finally illuminated the precise connection between the two methods. Casting the approximations as a unified operator, both classical and peridynamic meshfree derivatives can be obtained. This work also generalized the concept of a peridynamic pseudo-derivative and allowed both high-order numerical differentiation under peridynamics and high-order accurate solutions. This was then leveraged to obtain high-order accurate (convergent) peridynamics, whereas the previously existing formulation was also shown to provide no convergence of the solution. Exposing the link between classical and peridynamic meshfree methods led to Hillman's NSF CAREER award in 2020. Other recent work in this area includes a particle-based shock method that precludes Gibb's instability in shock problems and embeds shock physics (Zhou and Hillman, 2020), while a similar particle-based scheme was also developed for traditional meshfree methods in Baek et al., The introduction of other advances in the classical meshfree methods into peridynamics is also planned for robust simulation of fracture initiation and propagation.

Application of methods to natural and man-made disasters

Perforation problem with and without stabilization (tensile damage)

Technical summaries of the theory and application of these works can be found in the articles below:

Application of methods to earth-moving problems

These methods can be applied to a variety of problems involving large/extreme deformations. An example is shown in the following video.

Some details from LSTC (now ANYSIS):
Moving Least-Squares based formulation is used to model large deformations of cohesive soil. SPH simulation performed in LS-Dyna, surface generated in Paraview, and rendered in Blender through VisualSPHysics. In order to find the input decks, please visit : http://www.dynaexamples.com/ See all DYNA conference publications at : http://www.dynalook.com/